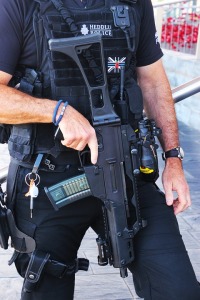 I have a cop who is involved in a shooting. She’s wearing a vest and is hit outside the vest’s protective area. I need her hospitalized long enough that the shooter (who she killed— they shot simultaneously, more or less) to have been claimed post autopsy. I can’t have her debilitated for months— just a week or two. Where would I shoot her? Hip? Leg seems hard to hit and shoulder does too. I don’t want her disabled, nor do I want a months long rehab.

What I would recommend is a shot coming through the side, under the armpit, causing the lung to collapse. I would pick the right side over the left— there’s just a lot more vasculature on the left that could prove deadly/problematic. If her right arm was raised and she was say . . . turning into the shot . . .  it could leave her vulnerable.

She would have difficulty breathing. How difficult would depend on how quickly the pneumothorax (air moving into the chest and deflating the lung) expanded. She would be transported to the ER via ambulance and receive an IV, oxygen, and vital sign monitoring.

A chest tube would be placed, likely after a quick chest film, unless she is in significant distress to re-expand the lung. If in significant respiratory distress or cardiovascular compromise then she would get a rapid needle decompression to buy some time or some facilities will go straight to chest tube placement. For a “simple” pneumothorax she would be admitted into the hospital (regular floor— not ICU) and observed.

Generally, depending on the size of the pneumothroax, it’s a few days to get the lung to re-expand, a day or two with the tube to “water seal” to make sure it stays up without suction, and then the tube would be removed. Maybe one or two more days after that to make sure all was well.

If she’s young and healthy she should recuperate pretty quickly, but would still be winded, perhaps easily fatigued for another week or two.

Hope this fits your time frame.