Today concludes a three-part series by guest blogger and CRNA Kim Zweygardt about what really happens in the OR. Kim took on several FB questions regarding anesthesia and the OR that I thought would be great info for writers.

Thank you, Kim for sharing your expertise with us.

Follow the links for Part I and Part II. 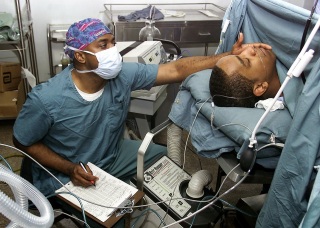 7. How aware are you under anesthesia? And I’ve heard sometimes people wake up during surgery but you give a medicine so they don’t remember. Is that true?
Let me answer the second part first. As I mentioned earlier, we give a combination of medicines in anesthesia and some drugs have an amnestic effect. So yes, there are drugs that we give you that provide amnesia so you don’t remember what happened. They can be given as part of a general anesthetic or as a sedative. But there are times someone says they “woke up during surgery” when they were sedated not anesthetized.” So what constitutes being asleep for surgery? For us, being asleep is a general anesthetic where you are so deeply unconscious that we are assisting your breathing. But, sometimes the actual anesthetic is a spinal, another nerve block or a local anesthetic. Because most people don’t want to know what is going on, we will give you sedation and you take a nap during the surgery. From our perspective, you are not “asleep,” you are napping, but from your perspective, you went into surgery and “went to sleep!” That causes confusion. I have patients tell me they woke up during their surgery. When we give you medicines to nap, you may wake up and be aware of what is going on. I tell patients that the difference is if I want to talk to you, I can call your name and ask you how you’re doing. You’ll wake up and talk to me and then when I leave you alone, you’ll drift back into your nap. But if you have a general anesthetic, I can talk to you all day and you won’t answer because you are totally unconscious.  As far as awareness, it depends on whether you are sedated (you may remember some things) or have a general anesthetic (you should not be aware during the operation). We’ve all heard the horror stories about people being awake during an operation. It does happen but is very, very rare.
8. How do you let the doctor know you are awake during the anesthetic?
As I said, true awareness is very rare. When it happens (or when they make awful movies about it) it makes the headlines but don’t forget that hundreds of thousands of anesthetics are done every day without awareness. I mentioned before that the amount of anesthetic you need is based on how much surgical stimulation there is (fancy way of saying how much it hurts). Even when you are anesthetized, your body still responds to pain if the anesthesia isn’t enough. The heart rate goes up. The blood pressure goes up. You will even have tears when it hurts. That is one of the reasons we are watching you every moment. If we see those changes, we can give you more medicines so that your body doesn’t have that stress response. The patient “tells” us the anesthetic needs to be deepened by all those changes in vital signs.
9) What do people say while they are asleep?
When I became a CRNA, we used Sodium Pentothal which was famous in movies as “truth serum.” It was a common question then about what they might say during an anesthetic. For “truth serum” very small sedative doses were given so the person was groggy. The thought was they were too drowsy to lie! But for anesthesia, a large dose is given so the patient is asleep in minutes with no time for conversation! I once interviewed a man who questioned me extensively seeking assurance he wasn’t going to say anything because of “that truth serum!” He even sent his wife out of the room while he questioned me further! I always wondered what he wanted to hide! Now we use a drug called Propofol. It works even quicker than Pentothal so rest assured, if you are going to sleep (general anesthetic), you’re not giving away any secrets!
10. What is the strangest thing you’ve heard someone say under anesthesia?
I once put a known psychic to sleep. The case was added on to the end of a long surgery day because the patient had forgotten to come for surgery the day before. (Which I found funny since she was a physic. Those of you who know me personally, get my sense of humor!)  She was a very pleasant woman and when questioned didn’t mention anything about having problems with anesthesia in the past. She was completely anesthetized when the surgeon stuck his head in the door to ask, “Did she tell you she has a history of recall during anesthesia?” Well, no, she hadn’t mentioned that small detail to me! I immediately turned up the anesthetic gas and gave some other medicines and but as I did, in a spooky séance’ type voice said, “If you can hear me, let me know!” As soon as the words were out of my mouth, her pulse went up significantly and I am sure she was doing exactly that although I never had the heart to ask after I woke her up! Years later I read a fascinating article about the subconscious mind and anesthesia awareness that made me think of her but that is another post!
**************************************************************************

Kim Zweygardt always knew she wanted to be someone special.  Her heart’s desire when she was 7 was to be a famous ballerina but when she read their toes bled from dancing on them, it became a less desirable career choice. Then Kim decided to be a famous lawyer solving mysteries and capturing the bad guys just like Perry Mason, but as she got older she discovered sometimes it was hard to tell just who the bad guys were.
Instead Kim chose a career in medicine practicing the art and science of anesthesia as a Certified Registered Nurse Anesthetist in rural Kansas, Colorado and Nebraska.
Kim is married to Kary, the man of her dreams, who has done a fabulous job of making all her dreams come true. They have three children but an empty nest and enjoy conversation with friends over good coffee and great food. They enjoy travel, the arts and taking a nap.
Member American Christian Fiction Writers, International Speakers Network, www.bookaspeaker.net, www.womenspeakers.net