My character is allergic to bees. The villains plan on using bee venom to make her death look like an accident if they need to. Is there any drug that would mimic bee venom, or will I need to use actual bees?
Jordyn Says: 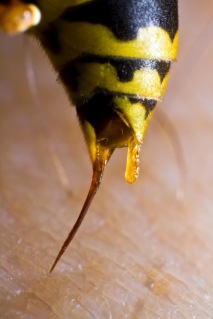 There is no drug that I’m aware of that would mimic bee venom so I think you’re going to need to use the real thing. You could just have the killer trap a bee against her body so it actually stings her versus trying to gather bee venom and try to inject her with it.
What actually kills a person if they are allergic to bees is not the bee venom itself– it’s the body’s response to the bee venom and the response it mounts is called anaphylaxis.
I think I should point out the difference between an allergic reaction and anaphylaxis. An allergic reaction is a localized response (I get stung by a bee and my whole arm swells up) or a skin rash.
Anaphylaxis is a multi-system reaction due to massive histamine release that leads to capillary leaking, massive swelling and edema. Anaphylaxis is defined as having two or more body systems involved reacting to the substance and can be two or more of the following.
Skin: Hives.
Gastrointestinal: Vomiting or diarrhea.
Respiratory: This would include anything from the mouth to the lungs. Lip swelling. Tongue is swelling. Itchy, scratchy throat. Thick feeling to the throat. Difficulty swallowing. Drooling. Wheezing in the lungs. Low oxygen levels.
Cardiovascular: Increased heart rate and low blood pressure.
When we treat anaphylaxis– each treatment is designed to stop the reaction. The more body systems involved, the more life threatening the reaction is.
#1 Drug given: Epinephrine via an intramuscular injection. Why not IV? An IV dose in a conscious person could cause enough coronary artery vasoconstriction to give the person a heart attack.
#2 Drug: Inhaled Albuterol IF the person is wheezing.
#3 Drug: A Steroid. If the person has multiple system involvement (particularly respiratory or cardiovascular) then this will be given IV. If not, then an oral dose is okay.
#4 Drug: Benadryl or diphenhydramine. This blocks one form of the histamine being release (H1 blocker). IV if sick, otherwise by mouth.
#5 Drug: An antacid like Zantac or Pepcid. This blocks the other form of histamine being released (H2 blocker). And same here, too– IV if sick, otherwise orally.
Patients with anaphylaxis are monitored for 8-12 hours after medications are given. Patients who require more than one dose of IM epi may be admitted to the hospital. The reason is that when the medication wears off we want to ensure the reaction doesn’t come back. Patients will go home with a script for an Epi Pen (or renewal script), a steroid for three days and then H2 blocker for three days.
If you’re interested in more information– here is a post I did on food allergies.

One thought on “Author Question: Death by Bee Sting”