To celebrate Poison’s release, I’m giving away THREE personalized copies of Poison by random drawing to commentors on this week‘s posts. To be eligible, you must leave a comment that includes your e-mail address. Must also live in the USA. Drawing will take place midnight on Saturday, February 9th. Winner announced here at Redwood’s February 10th.

I like book titles with double meanings. My first published book was titled, Proof. There were two types of proof the heroine needed. Proof to convict her assailant of his horrific crimes and proof of God in her life.

Poison, the second book in the Bloodline Trilogy, is releasing this month and in this instance—there is an actual nefarious agent (not giving away too much) and a side meaning as well.
What poisons your life? Is it a bad relationship? Is it believing a lie? Is it an actual toxin like dirking too much liquor, using illegal drugs or prescription drugs in ways they weren’t intended? 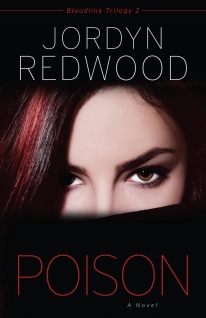 Writing suspense, particularly with a heavy medical edge, I think requires something unusual to be found. I’m a research hound. I love to learn about new things. And for Poison, I read a lot on different types of toxins.
Aren’t toxins interesting? How minute substances can make a person ill or end up killing? This is the stuff suspense novels are made from and the lure for every author—finding that one poison—undetectable, fast-acting, easily transmittable or ingested without the victim knowing.
I remember as a youngster hearing the story of how a long-dead great uncle had passed. According to my grandfather, he’d served in the military during WWI and had died as the result of complications from mustard gas exposure.
So lately, in thinking about toxins, I began to wonder what exactly mustard gas was and how did it kill.
Interestingly, I discovered that term “gas” can mean more than just a vaporous substance and can be any chemical substance.
Lethal Gases: Lead to disablement or death.
Harassing agents: Disrupt enemy soldiers.
Accidental Gases: Gases encountered during war that are not related to a chemical agent like excessive gases from gunpowder during a fight.
Mustard gas falls into the first group—lethal gases. Tear gas, for instance, would fall into the second category.
But how does mustard gas kill?
Mustard gas is also called sulfur mustard and its name is derived from its foggy yellow appearance and mustard like smell. It’s a blistering agent/alkylating agent and comes in many forms: vapor, liquid or solid. When a person comes into contact with the agent, it damages the skin and mucous membranes inside. The chemical liquefies tissue.
Since it freezes at a high temperature, it’s not very effective when it’s cold. It doesn’t spread easily and would fall to the ground before soldiers could be exposed. This property also made it a good weapon because it could stay low on the ground for weeks depending on the temperature and expose unsuspecting troops going into the area. Another factor that made it a good weapon—people adjusted to the smell quickly.
Mustard gas was used first by the Germans in 1917 and was born out of the trench warfare era where new military strategies had to be devised to get men out of their bunkers. The agent was fitted onto artillery shells which were then shot to toward the enemy lines without the accompanying explosion which I’m sure seemed strange to the soldiers at the time.
Hey, why didn’t that thing blow up? What exactly is that yellow fog?
Unfortunately, mustard gas doesn’t often kill expediently. The first symptom was generally red blisters to the skin that developed within 2-24 hours. If the gas was inhaled, these blisters would slowly develop and seal off the airway.
Other symptoms:
It was possible for the body to heal if there was a short, brief encounter. Longer, more frequent exposures proved to be more deadly.
By the end of WWI, chemical agents inured 1 million soldiers and civilians and killed 100,000 people.
Likely, mustard gas wouldn’t be considered favorable to use in chemical warfare these days because of its prolonged activity.
This link goes to a very powerful article on mustard gas and its effects and was used heavily in the writing of this piece—the italicized areas are from the article. It is definitely worth the read.
What about you? What interesting things have you researched that have ended up in a novel?