In short, police are responding to a presumed intruder though the intruder thinks he’s rented the place! The genre is romantic comedy. You can read the first post here. 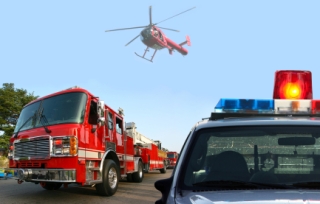 If they are carrying long guns, then obviously the weapons are out and ready to be used. It would be typical to have their side arms drawn in this situation. It’s justified for two reasons. The first being that the man in the house called to report an intruder on his doorstep, which is felony in progress.

The second is that they know this girl and they are automatically suspicious of the man inside the home, which is also a potential felony. Felons automatically get that kind of special attention.

5. If this is plausible and the cops immediately detain the man for suspected foul play, how would they detain him? Cuffs? Secure him in the back of a cruiser until they make sure the girl is okay? Pin him to the ground?

They are going to give him some verbal commands to exit the house, come to them, face away and put his hands behind his back. They would cuff him and they would probably place him in a patrol car. They could also just sit him down on the lawn and keep a knee in his back. It’s a little more aggressive and humiliating which looks to be the goal here.

However, this guy is going to be scared and confused and he may not like the cops ordering him out of his own place (or so he thinks) at gun point. This could cause him to hesitate and/or verbally object to complying with the commands being given to him, which would result in the police using a more aggressive, hands on approach.

6. The man is holding the woman at gun point until the cops arrive, and he tells the police this when he first calls 911. It turns out to not even be loaded, and he puts it away before he the police arrive. But if the cops believe he has a gun, and he’s the one to open the door, how would they react/respond? (i.e. guns drawn, telling him to put his hands where they can see him, patting him down for a weapon? etc.)

Okay… This question may actually change some of my previous answers, especially for question number three. If the man is holding her at gun point and he has informed dispatch of this, then the cops are going to roll all the way in lights and sirens. They would probably shut the sirens off at the end of the block so they can communicate over the radio easier. Cop cars don’t have a lot of sound proofing and the sirens really do hinder listening to and talking on the radio.

Secondly, they will use their cop cars to establish a barrier or cover for themselves at the street. Other responding units are going to spread themselves out to establish a perimeter around the home. Verbal commands are going to be shouted (or possibly called out over the public address (PA) speaker on the patrol car) to the home for the man to come out with his empty hands up and he’ll be detained as previously described. Mostly likely they would cuff and stuff him in a patrol car, as the cars are now right in front of the house. The general rule of thumb is always cuff then search the suspect before putting him in the car.

Also, the cops are going to clear the house to make sure there is no one else inside. This means a room to room search of the home with weapons drawn. They are going to open all the closet doors, check under the beds, check the showers, check the cupboards, check the crawlspaces and the attic, basically anywhere a person could fit into. This would be done immediately after the man in the home is detained. They don’t need permission, they’re just going to do it.

They will ask him, “Is there anyone else in the house?” They will proceed no matter what the answer is. They will announce themselves at the front door. “This is the Police! Is there anyone inside the home? If there is anyone inside the home you must announce yourself and come to the front door with your hands up. This is the police, we are coming in the house.” Two or three cops will clear the house together so they can provide over watch of each other and maintain security of areas that have not yet been cleared.

Finally, let’s not forget that the responding officers are going to get a coded channel on the radio before arriving on scene. This means that one of the police channels is dedicated to the units that are involved in this call for service and all other normal police traffic is goes to another channel. Depending on how quickly the situation is developing, the primary police channel may be coded and normal traffic goes to an alternate channel. However, since these cops in this scenario have to travel to this location and this is not a situation that just blew up in their face, the responding officers would likely use the alternate channel for their priority traffic and all other normal traffic would stay on the primary radio channel. Some typical radio traffic would be.

Lead Unit: “3 Adam 12, I need a code on channel two.”
Dispatch: “Copy… All units stand by for a code.” A two second, high pitched tone comes over the radio. “All units be advised that channel two is code for units responding to (address). All other traffic remain on channel one.”

After it’s all over and everything is secure and safe some typical radio traffic could be:

Lead Unit: “3 Adam 12, all units are code four; you may clear the code.”
Dispatch: “Copy.. All units stand by.” They do the two second tone again. “All units the code on channel two is now clear. All radio traffic return to the primary channel.”

Many thanks to my brother, Karl, for taking the time in answering these police questions.

It’s always good to have an expert on hand.

Amy Drown has a History degree from the University of Arizona, and has completed graduate studies in History and Archaeology at the University of Glasgow. An executive assistant by day, she also moonlights as an award-winning piper and photographer. But her true addiction is writing edgy, inspirational fiction that shares her vision of a world in desperate need of roots—the deep roots of family, friendship and faith. Her roots are in Scotland, England and California, but she currently makes her home in Colorado. Find her on Facebook at www.facebook.com/GlasgowPiper.