I am so so pleased to host amazing author and fellow research hound, Sarah Sundin, back to Redwood’s this week. Sarah is a fabulous historical author whose novels highlight the WWII era. This week she is discussing her research into medical air evacuation and flight nursing.

Sarah has also graciously agreed to give away one copy of her newest release, With Every Letter, to once commentor on any of this weeks posts. Simply leave a comment with your e-mail address. Must live in the USA. Drawing will be midnight, Saturday September 29th. Winner anounced here at Redwood’s Sunday, September 30th.

Mellie smiled at her patient. “Are you enjoying the flight?”

“Sure.” Corporal Fordyce stared at the fuselage curving over his head. Mud from the battlefield speckled his hair, and dark stubble covered his cheeks.

Mellie settled her hand on his blanketed arm. “How does your leg feel?”

“I know,” she said softly. Now was no time for platitudes.

In my novel, With Every Letter, the heroine serves as a flight nurse. If you’re writing a novel set during World War II, a soldier character may get sick or wounded, and you might need to understand medical air evacuation. 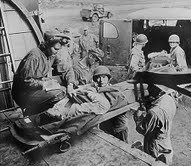 Let’s follow my fictional patient, Corporal John Fordyce. While retaking Sbeïtla, Tunisia from the Germans in March 1943, Fordyce steps on a landmine. Medics perform first aid and take him from the battlefield to the battalion aid station, where he’s stabilized. An ambulance carries him to a field or evacuation hospital, where his right leg is amputated below the knee. Since the corporal will receive a medical discharge, he will return stateside. An ambulance will take him to the airfield at Youks-les-Bains, Algeria. A C-47 will fly him to Algiers. Later he’ll fly to Casablanca in French Morocco, where he’ll take a hospital ship home for convalescence.

At Youks-les-Bains he arrives at a tent hospital at the airfield. The flight surgeon evaluates the patients to decide which are good candidates for air evacuation. Due to high altitude, the doctors prefer not to send patients with serious head injuries, sucking chest wounds, or severe anemia. Each combat theater has different policies on “neuropsychiatric” patients, but if they’re allowed, an extra technician will attend these patients.

At the airfield holding unit, the physician briefs flight nurse Lt. Mellie Blake on each patient. Mellie in turn orients the patients—most of whom have never flown—on what to expect. Corporal Fordyce wears an Emergency Medical Tag (EMT) which summarizes his condition and treatment. A large envelope with his medical records and X-rays rests beside him on the litter.

The surgical technician and medics from the holding unit carry the litter patients onto the plane. At the cargo door, Mellie checks the EMT against the list of patients on her flight manifest and directs the tech where to place each patient based on his medical needs.

The litters are clamped into aluminum racks along each side of the fuselage, stacked three litters high. Later versions of the C-47 will come equipped with lightweight web-strapping systems to hold litters. Fordyce is placed in the top tier with his bandaged stump facing the aisle for easier access. Lower tiers are reserved for patients with heavy casts or needing more intense care. 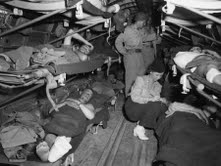 After the patients are secured, the C-47 glides down the runway. When the plane levels off, the flight nurse and technician see to the patients’ needs. They record Fordyce’s “TPR” (temperature, pulse, and respiration) on the flight manifest, and check for signs of bleeding and infection. Mellie is trained to treat shock, hemorrhage, pain, air sickness, and other medical emergencies, but Fordyce is stable and needs little care.

The flight team also provides water and food if needed. They converse with the patients, a voice of calm for the anxious and of encouragement for the depressed. If no patients are on oxygen, the men are allowed to smoke.

The interior of the C-47 is poorly ventilated and heated, and becomes stifling in hot weather and frigid in colder climates or higher altitudes. Smells can become overwhelming, especially when burn patients are aboard or someone becomes airsick. Surprisingly, air sickness occurs in less than 1 percent of flights. Corporal Fordyce is thankful his flight is in the 99 percent. 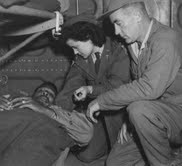 After an uneventful two-hour flight, the C-47 lands at Maison Blanche Airfield in Algiers, Algeria. Mellie and the technician unload the plane with the help of men on the ground. A trained flight team can unload a full plane in 5-10 minutes, which is crucial in case of crash landing, ditching in water, or landing at a field under enemy fire.

An ambulance ferries Corporal Fordyce to a hospital in the Algiers area while he waits for the next step in his journey home.