I am so so pleased to host amazing author and fellow research hound, Sarah Sundin, back to Redwood’s this week. Sarah is a fabulous historical author whose novels highlight the WWII era. This week she is discussing her research into medical air evacuation and flight nursing.

Sarah has also graciously agreed to give away one copy of her newest release, With Every Letter, to once commentor on any of this weeks posts. Simply leave a comment with your e-mail address. Must live in the USA. Drawing will be midnight, Saturday September 29th. Winner anounced here at Redwood’s Sunday, September 30th.

“Do you have room for one more litter case?” the doctor asked. “Private Jenkins fell headlong on a landmine. The nearest hospital’s in Cefalù, a long ambulance ride over rough roads. By air he’ll be in Mateur in two hours. He needs a thoracic surgeon.”

Mellie stared at the unconscious patient. He lay on a litter, his torso swaddled in white gauze. Bloody streaks painted his face, arms, and khaki pants. “We’re his only hope.”

In my novel With Every Letter, the heroine serves as a flight nurse. If you’re writing a novel set during World War II, a soldier character may get sick or wounded, and you might need to understand medical air evacuation.

As soon as the Wright brothers took to the air, clever minds thought of ways to use the new contraption. In 1910 two Army officers constructed the first ambulance plane, and during World War I the Army experimented with transporting patients by air.

The advent of large multi-engine cargo planes in the interwar years made these dreams realistic. In November 1941, the US Army Air Force authorized the Medical Air Ambulance Squadron. Air evacuation was first performed informally early in 1942 during the construction of the Alcan Highway and in Burma and New Guinea. The first official air evacuation with flight nurses was flown on March 12, 1943 in Algeria. 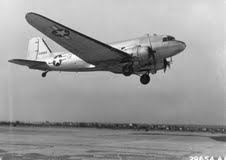 Speed is the primary benefit of air evacuation. Planes can also traverse inhospitable terrain or dangerous seas. The military came to see that air evacuation required less equipment than ambulance transport, aided recovery, and increased morale on the front.

However, planes were unable to fly in bad weather, and planes were not reserved for ambulance use. Since top priorities for transport planes were airborne missions and carrying supplies, medical air evacuation depended on availability. Also, dangers existed from crashes and enemy planes. Since transports carried cargo and troops, they were not allowed to be marked with the Red Cross and were legitimate military targets. Fighter coverage was provided in some combat theaters.

Use of Air Evacuation in World War II

Thirty Medical Air Evacuation Transport Squadrons served in World War II in every combat theater. In all, 1,172,000 patients were transported by air. About half were ambulatory patients (the “walking wounded”) and half were litter patients. Only 46 patients died in flight, although several hundred died in crashes. By 1944, 18 percent of all Army casualties were evacuated by air.

The C-47 was the workhorse of air evacuation. This dependable two-engine plane was used for shorter flights within a combat theater and could fly into forward landing strips close to the battlefield. A C-47 carried 18-24 patients, depending on how many were on litters. 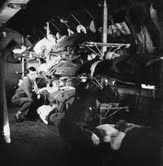 For transoceanic flights, the four-engine C-54 Skymaster was used. The preferred load for a C-54 was 18 litter patients and 24 ambulatory. These flights carried patients from the combat theater stateside when the patient required 90-180 days of recovery or was eligible for medical discharge.

The C-46 Commando was used less frequently. Although it could carry 33 patients, the cargo door made loading difficult, and the plane had an unsavory habit of exploding when the cabin heater was used.

Medical air evacuation revolutionized the care of the wounded. Gen. Dwight Eisenhower credited air evacuation, sulfa drugs, penicillin, and the use of plasma and whole blood as key factors in the significant drop in the mortality rate among the wounded from World War I to World War II.

The World War II Flight Nurses Association. The Story of Air Evacuation: 1942-1989. Taylor Publishing Co., Dallas TX, 1989. [Source of most of the photos used in this article]