I’ve never believed in the concept of fiction. In my opinion a writer and his work are made of the sum of his or her life experiences. In that vein, my journey to writerhood has been a journey of meeting people and experiences head-on. Everything I am, everything I have ever been, comes from and goes into my writing.
When I was younger I wanted to be a lawyer. I’d always heard the cries of society’s disenfranchised and thought the best place to address those challenges was in a legal forum. I’ve also had my own challenges in life, as we all have. These obstacles have both informed and influenced the direction and decisions of my life.
I was born with a birth defect called Spina Bifida, a problem where the neural tube, the embryonic structure from which the brain and spinal cord form, fails to close leaving the spinal cord partially exposed. People with this condition face the possibility of suffering from several developmental difficulties including limited mobility and cognitive deficits.
Prior to 1988 my condition was not very serious. I had what some might call an awkward gait, but not much else. That all changed though when, in July of that year, I was the victim of a car crash. Since then I’ve lost the use of my legs and have a few other problems all in some way related to the original Spina Bifida (without which the accident might not have been so bad).
All of this, plus my slightly unconventional, liberal philosophies sent me on two career paths. First, after college, I tried to get into law school. So-so grades and lousy LSAT scores stopped me cold. So, still wishing to help the disenfranchised, I attended graduate school and attained a Master’s Degree in Social Work.
I took that and worked for two years in a group home for mentally challenged men. Then the car accident changed my path. With plenty of time on my hands recovering from the accident, I decided to pursue my lifelong desire to write. Here again I wanted my work to help those who needed help. So, for roughly the past twenty years I’ve been writing about disability issues, everything from sports to politics. I’ve written articles for both local and national publications.
One of those articles, about a real-world GPS/virtual reality device that allows blind people to navigate their world, helped launch my career as a novelist. My Blind Traveler mystery series (Blind Traveler Down a Dark River and Blind Traveler’s Blues) stars Douglas Abledan, a blind computer technologist who uses this kind of device, and his remaining senses, to uncover and solve murders.
Every writer has a reason they do what they do. Every writer has a story to tell, one that is personal to just them. Being born with a disability, and learning how to deal with both it and the ramifications of an accident, are my reasons and my focus as a writer. Through my own experiences I try to help people. In my fiction I’ve created a protagonist who finds tools to deal with his disability, in his case it is blindness. I try to show my readers the trials and obstacles that a blind man faces daily. But, I also attempt to demonstrate how full life can be no matter the challenges one faces.
******************************************************************************** 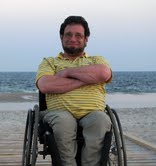 Robert Bennett, a former social worker turned writer, lives in the house he grew up in with his mother, one of his two brothers, two dogs that don’t get along, and a turtle.  His lifelong focus has been a concern for the needs of society’s disenfranchised.  His articles span a wide range of topics from sports to technology and from politics to social justice.  His fiction is grounded in real world events and technologies as well as his own philosophical concerns.  “It is the act of truly living and believing in yourself that is important, not the manner in which that action is undertaken.”  Mr. Bennett has spoken to groups of physical therapy students, church members and senior citizens, and has appeared on several radio programs.  Contact Mr. Bennett through his website at http://www.enablingwords.com/