Dee asks: How long would it take a character to bleed out if they were shot in the arm and the back? What organs can be hit to bleed but not be lethal?
Jordyn says: 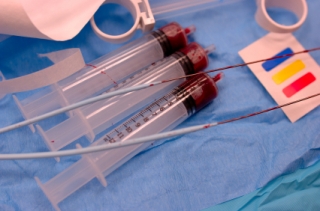 If an artery is hit, bleeding out (exsanguination) can happen very quickly. Like a matter of minutes. So, if you want these people alive, I wouldn’t have the bullet hit any artery. You have several major arteries in your chest (aorta, pulmonary artery, etc) and the brachial artery in your arm that lies under your bicep. A truly severed artery will pump blood out with each heart beat and the bleeding is hard to control. So, I would go for venous bleeding which can also be dangerous but will allow more time and can be easier to stop.
Dee asks: I’d like the character to be in the hospital for a few days. What is the option there?
Jordyn says:
You’d asked what organ could be hit but not be lethal. I would personally go with a lung injury if there is a bullet to the chest/back. The lung could collapse and cause bleeding as well. This would require placement of a chest tube to resolve so they’d be hospitalized for 3-5 days depending on how the lung re-inflated.
Keep in mind, venous bleeding can be deadly as well. If some of the larger veins are hit like the subclavian vein which is up by your clavicle– bleeding could be swift enough if not stopped to cause death. All bleeding can lead to death if it’s not stemmed (either by your blood clotting or by someone applying pressure to keep the blood in place until the blood clots). I once heard a coroner give a talk about a man who was drunk and on Coumadin which is a blood thinner. He dropped a knife onto his foot and happened to cut an artery. Well, in his drunken state, he didn’t realize how serious it was and he bled to death. Sad but true.