Jocelyn Asks:
I’ve written a hurricane scene, and I don’t think I got the medical details right, so I thought I should check with you. 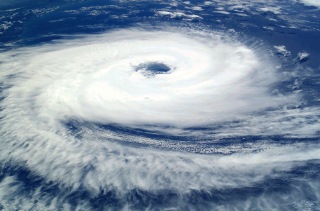 I have characters abandon their ship as it goes down. They stay afloat using planks of wood, but just holding on to them in the water, not lying on top of them. This takes place in the Gulf of Mexico in September.

When they are rescued several hours later, what will their condition be? Will they be fully conscious? Would they be cold? My heroine’s brother dies in the water, so is that enough to put her into shock, along with the ordeal of surviving the hurricane?

While one character is floating in the water, a piece of bowsprit breaks off from another ship and flies through the air, hitting him. I want to injure him enough for him to lose his grip on the plank he’d been holding onto, but I don’t want him to die from this injury. I was thinking if the wood hits him in the arm or shoulder, either breaking his arm or dislocating his shoulder, that would be good enough. Is that realistic though? Or does it just depend on the angle and the velocity?
Jordyn Says:
First thing to determine is the temperature of the water in the Gulf of Mexico in September. I found a table from the National Oceanic and Atmospheric Administration with water temperature tables for the Gulf of Mexico  that lists temperatures for September in the mid to upper 80s.

The next question is how long does it take hypothermia to set in when you’re submerged in water at this temperature?

This table gives an “indefinite” time frame where as it lists time limits for cooler water temperatures. For instance, in water that is 32.5 degrees, it gives a time of under fifteen minutes for exhaustion or unconsciousness to set in.
Considering this information, your characters should be conscious when they are rescued. Just because they don’t die from hypothermia doesn’t mean there aren’t other risk factors like getting eaten by ocean creatures, sheer exhaustion, or dehydration and malnourishment from not eating or drinking.

If the rescue is under twelve hours, I’d imagine they would be in pretty good shape. An adult can probably survive three days without water but it would also depend on what environmental factors are present. You’ll dehydrate faster in sunny weather than a cool, overcast day. I would imagine they would still feel cold. Your normal body temperature is 98.6. Hot bath water ranges from 99-104 degrees. Bathwater temperatures vary depending on the source and hot tubs are around 104 degrees. So, being immersed in 80 degree water will still feel cool. Patients getting room temperature IV fluids always get chilly.

Emotional traumas like the death of a loved one AND surviving a cataclysmic weather event can put someone into shock.

I think it’s reasonable to give your character a fracture after being hit by the bowsprint. But then he’d be unlikely to use that arm at all to hold onto things but it should be a survivable injury if a closed fracture and the rescue is fairly soon. I would think an open fracture, where the bone comes through the skin, would put him more at risk for complications and lower his survivability if the rescue is delayed by a few days or more.

I’ve got a 25 year old woman that is shot through the left calf and the upper torso (I was thinking, maybe having the upper body shot piercing her shoulder) by crossbow bolts made of wood in my fantasy novel. The weapons that shoot her are each one-hand-held, meaning that they can be aimed and fired with only one hand.
What I need to know is this:
1. Would this outright kill the character?
2. If yes, where on the average human female body can I have two crossbow bolts made of wood puncture that body in such a way as to negate instant death, but still leave months of recovery time for that character, if she gets the proper medical help fast enough?
For background information, the science level of the world I am writing is roughly the same level we have today in America and Europe, the same with this world’s medical tech and knowledge.
Jordyn Says:
Thanks for sending me your questions.
1. A wound to the calf is unlikely to outright kill someone immediately. Any bleeding that’s not controlled if brisk enough can lead to death. Infection is a risk with any wound– particularly those that are caused from things (like arrows) that penetrate the body deep into its tissues leaving bacteria and other microorganisms behind.

The shot to the torso has more likelihood to cause death if it hits the right structure. On the left side of your chest are your heart, great blood vessels, and lungs. If the shot was more to the shoulder then an outright kill would be less likely and the risks above would be more prominent (bleeding and infection).

2. A shot to the calf and the shoulder have the potential to set your character back several months. If you don’t want the character to die– I would avoid having a shot to the torso. A projectile to any extremity can cause the bone underneath to fracture. Fractures typically take 6-8 weeks to heal.

If you didn’t want to go with a fracture of the bone from the projectile– you could have onset of infection (depending on how sick you’d want her to be for those months). Systemic infection can easily cause death. Local infection to the wounds can be problematic as well. You could also go with tendon damage to the arm or leg which would inhibit movement of the extremity. Healing and rehab of tendon and/or ligament damage can take months as well. Whenever an extremity isn’t used because it’s immobilized you always get muscle atrophy (muscle wasting) which causes weakness of the arm/leg, etc. It takes time to rehab that as well.

Good luck with your novel!

I have a question about treatment of a leg fracture in the late 1860’s. My character has broken his tibia (? –the bone at the front of the calf). It’s not a compound break. Can you tell me if it would have been splinted or casted at that time, and how long before a determined person with such a break could walk using crutches? How long do such breaks take to heal?

Here is a great source that talks about the invention of plaster of paris. It looks like it would have been used for casting during your time frame. http://www.ehow.com/about_5134930_plaster-paris-history.html
This link says specifically:

With a cast in place– he should be able to walk with crutches but NOT bear weight right away. That would be very painful. People are usually in casts, depending on the break, for four to six weeks. Today, we usually splint people for a week to allow for swelling before the cast is put in place to prevent compression syndrome but I can’t say whether or not that would have been common practice at the time. He will have muscle atrophy of the leg during that time from non-use/limited use.

Ann Shorey has been a full-time writer for over twenty years. Her writing has appeared in Chicken Soup for the Grandma’s Soul, and in the Adams Media Cup of Comfort series. She made her fiction debut with The Edge of Light, Book One in the At Home in Beldon Grove series. She’s tempted to thank Peet’s coffee and Dove chocolates when she writes the acknowledgments for her books.

She may be contacted through her website, www.annshorey.com, which also contains her blog, http://annshorey.blogspot.com/ or find her on Facebook at http://www.facebook.com/AnnShorey.

I have a couple of questions for you about a broken foot. In my WIP, my main male character broke his foot. About how long would it be before he could be up on stage in a rock concert? He’s the lead guitarist of a Christian rock band and is quite active during the show (running around, etc).

Jordyn Says:
First, I’m assuming you mean a bone in the foot is actually broken and not the toe itself.
I was actually able to run this by an ortho doc and these are his thoughts. Splint/crutches for one week with limited mobility. Then a walking boot for 4-6 weeks. He thought it would be hard for him to bear weight for the first two weeks so I think jumping around on stage would be problematic during that time frame.

After the first two weeks, he should be able to walk and bear weight but jumping around may still be difficult. Probably could go either way. If he does choose to do a concert– at least have the foot be painful during/after the performance.