Looking for a little bit of help with some 9mm gunshot wounds. I was going for non-lethal aside from possible bleeding out and injuries that would have long recovery time.

I have a character get shot at point blank range in the lower right abdomen from the front. Then in the right shoulder/clavicle, also from the front, about five to ten feet away, breaking the clavicle. Finally, in the left calf from behind from ten to fifteen feet away, breaking the tibia which is made worse when the shooter grinds his foot into it.

Since this is largely a rehab question I reached out to Tim Bernacki, a great physical therapist, who I highly recommend from personal experience. If you live near Castle Rock, CO look up his clinic, Front Range Therapies.

Generally, time frame of healing is 6-8 weeks for most things, especially soft tissue. All these injuries would require surgery. The clavicle fracture would require an open reduction/internal fixation (ORIF)—this means that there is an incision made and hardware placed to stabilize the fracture. 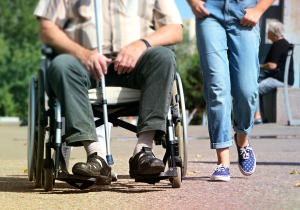 I wouldn’t know what is done if the clavicle is “shattered” and is in a multitude of pieces. The wound would have to be a glancing hit that results in a fracture. Anything more severe in the area could result in ruptured arteries, as well, and the person cannot die from this wound.

The tibia fracture also would require an ORIF—either plate, screws, or rod with locking screws. The difficult thing in all this would be that due to the leg recovery, the person will be using an assistive device, but probably cannot use crutches due to the clavicle pain. Perhaps a walker could be used. Depends on how conditioned the person is, how young, etc . . .

The leg injury would require limited weight bearing for 6 weeks I would guess. If all heals as expected according to x-rays, then they would transition into weight bearing as tolerated (WBAT). Probably would have a limp for several weeks after that. Likely wouldn’t run until four months following surgery if all goes well. The clavicle would probably have a sling for maybe 2-4 weeks (if no repairs to muscle or rotator cuff were done). After that, overhead reach would be most affected and for several months.

As for the abdominal injury, other than not bearing down with pressure for a short time, I wouldn’t think there are other issues to consider.

I’ve seen some gunshot wounds (GSW) where the bullet enters, hits a long bone, changes course and travels along the bone. This assumes the round is a practice round (full metal jacket) and not a hollow point. Hollow point bullets or defensive rounds open up when they hit something, resulting in a much-enlarged object/wound. I’ve seen rounds left in place because taking them out was unnecessary and I’ve seen rounds removed because of the location. Sometimes there are exit wounds and sometimes there aren’t depending on what stops the round. Sounds like there wouldn’t be an exit wound with the clavicle and leg but could be with the abdominal (perhaps in the low back).

Hope this helps and good luck with your story!