For you, my faithful reader, I took in the latest foray into the medical drama by watching New Amsterdam. I was hesitant because of being burned recently by The Good Doctor and The Resident. I know, some of you are loving those two shows, but let’s try to be somewhat medically accurate if you’re going to write a medical drama. 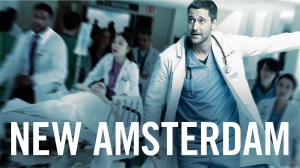 Of course, his moral center is to upend the system for the benefit of patients and not necessarily the gain of money. This is in itself strange since they make it a point to say this is a public service hospital— which still needs to worry about money— but the feeling is different than working at a for profit hospital.

To carry through his moral center, he needs to make big changes fast. I’ll step through some of what I found problematic with the first episode, but I was intrigued enough to keep watching so I’ll keep you posted.

Problem One: One of his first acts as medical director is to fire the entire cardiothoracic surgical team— like every. single. one. Put aside that generally there are a lot of hoops to go through when firing anyone, particularly a doctor, this action puts the hospital at risk of not being able to serve the people he wants so desperately to save. Level I trauma centers must meet certain requirements in order to keep their doors open and firing the entire cardiothoracic surgical team is going to put this in significant jeopardy.

Problem Two: Committing a patient to inpatient psychiatric treatment to keep her out of foster care. Again, as with my recent post on the movie Unsane, there are strict laws on how long you can involuntarily commit someone and generally it needs to be reevaluated on a weekly basis. So, though commendable (because she does like the staff where she is and it would keep her safer than where she’s been), it’s just not feasible that any scenario like this would ever pan out.

1. “The patient got diazepam and Valium.” Okay, awesome. These are exactly the same medication. So, you gave the same drug twice?

2. This is a set of orders given by an ER physician. “I need a CBC, BMP, Chem 7 and a saline lock.” Sweet! A CBC is a complete blood count, however a BMP (basic metabolic panel) and a Chem 7 are the same test.

Overall, an intriguing show and I’ll give it another try, but I’m also available for medical consulting!

One thought on “New Amsterdam: A Problem with Repetition”