Jocelyn has returned for Part II in this series on Civil War medicine and amputees. Check out Part I here. 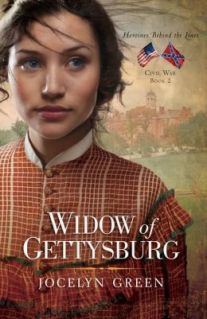 As an added bonus, Jocelyn has graciously offered to give away a personalized copy of her latest novel, Widow of Gettysburg, to one commentor. To enter, leave a comment on any of her posts over the next three weeks WITH your e-mail address. Must live in the USA. Winner drawn midnight, Saturday, May 11th, 2013 and announced here at Redwood’s on May 12th, 2013.

Jocelyn has also graciously said she’ll send you a signed bookplate if you have any of her novels and would like one. Again, MUST have your e-mail.

Jocelyn appeared before at Redwood’s and you can read those posts here and here.

Many entrepreneurs who developed artificial limbs were Civil War veteran amputees themselves. In fact, one of the most successful pioneers in prosthetics was Confederate veteran James Edward Hanger, whose amputation in West Virginia was the first recorded amputation of the Civil War. He was 18 years old at the time. Union surgeons discovered him wounded and performed the amputation, giving him a standard issue replacement leg: a solid piece of wood that made walking clunky and difficult.
Hanger’s adjustments included better hinging and flexing abilities using rust-proof levers and rubber pads. He also used whittled barrel staves to make the limb lighter-weight. He won the Confederate contract to produce limbs, and by 1890, had moved his headquarters to Washington, D.C., and opened satellite offices in four other cities. The company he founded – Hanger, Inc. – remains a key player in prosthetics and orthotics today.

The Civil War-era commitment to support veterans continues today through programs of the VA and the Defense Advanced Research Projects Agency (DARPA) to ensure ongoing progress in prosthetics design. The war set the prosthetics industry on a course that would ultimately lead to today’s quasi-bionic limbs that look like the real thing and can often perform some tasks even better.

To see just how far we’ve come in the realm of prosthetic limbs, I invite you to take a look at the video below. This is a brief look at the story of Taylor Morris, the fifth quad amputee veteran in the U.S. Army. You will see Taylor, who is from my hometown of Cedar Falls, Iowa, go from the hospital bed shortly after his surgeries, to dancing with his girlfriend again at the end of the video. (Have a Kleenex handy!)
http://youtube.googleapis.com/v/opWV472p5NQ&source=uds
For further reading:
Hasegawa, Guy R. MendingBroken Soldiers: The Union and Confederate Programs to Supply Artificial Limbs. Southern Illinois University Press, 2012.
*********************************************************************