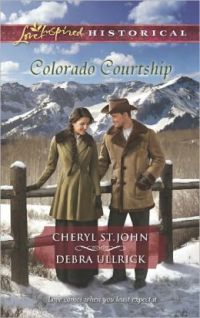 My WIP is set in the late 1800’s, and my hero is in a wheelchair. Is there some kind of an injury that isn’t permanent and is more of a mental thing? A doctor told my hero that he can walk. Even though my hero is a doctor, too, he doesn’t believe it. He doesn’t know it’s because he blames himself for his sister’s death. Does such a thing happen? If so, what would it be called, and would someone massaging his legs and bending them and stuff help him get better? Or how does one recover when their injury is partially due to trauma?

Thanks for sending me your question, Debra, and many congratulations on your latest release, Colorado Courtship.

Yes, such a thing does happen!

I think what would fit well for your character is a conversion disorder.

To highlight, the italicized portion is from the following link:

Conversion disorder symptoms may occur because of a psychological conflict.

Symptoms usually begin suddenly after a stressful experience. People are at risk of conversion disorder if they also have a medical illness, or the other mental health problem of dissociative disorder (escape from reality that is not on purpose) or a personality disorder (inability to manage feelings and behaviors that are expected in certain social situations).

Persons who have conversion disorder are not making up their symptoms (malingering). Some doctors falsely believe that this disorder is not a real condition and may tell patients the problem is all in their head. But this condition is real. It causes distress and cannot be turned on and off at will.

The physical symptoms are thought to be an attempt to resolve the conflict the person feels inside. For example, a woman who believes it is not acceptable to have violent feelings may suddenly feel numbness in her arms after becoming so angry that she wanted to hit someone. Instead of allowing herself to have violent thoughts about hitting someone, she experiences the physical symptom of numbness in her arms.

This link is interesting because it talks specifically about your time frame. http://en.wikipedia.org/wiki/Conversion_disorder

From the Mayo Clinic which is a very reputable site: http://www.mayoclinic.com/health/conversion-disorder/DS00877

Would massaging his legs help him get better? Of this I’m not sure. Treatment would probably pertain to how they treated these injuries at the time. Massaging may help psychologically and therefore “improve” the injury. If he’s not using his legs– what will set in is atrophy/contracture of the muscles– like foot drop. What can help this is stretching and splints as far as contractures but muscle atrophy is going to develop depending on how long he’s in the wheelchair.

How does one recover when their injury is partially due to trauma? It depends on what the actual physical injury is which you haven’t outlined here. Psychologically? That’s a whole other ball game. There is no set time frame for matters of the mind so you would have some leeway here as an author. It depends a lot on the patient and whether or not they want to get better.

Debra Ullrick is an award-winning Christian romance author. In addition to multiple full-length novels, her stories have been featured in several novella collections, one of which made the New York Times bestseller’s list. Debra is happily married to her husband of thirty-eight years and has one daughter. For over twenty-five years, they lived and worked on cattle ranches in the Colorado Mountains. One of those ranches is partially owned by a famous movie star and her screenwriter husband. Debra loves writing, reading, feeding wild birds, animals, watching Jane Austen movies, COPS, or Castle, classic cars, mud-bog racing, and monster trucks.