As research for my next trilogy I’ve been reading a lot of non-fiction books surrounding near death experiences or NDE’s.

You can read the series I did on Proof of Heaven by Eben Alexander, MD by following these links: 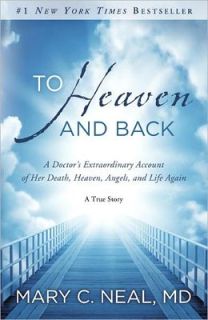 To Heaven and Back is the personal account of orthopedic surgeon Mary Neal and the events of her life after she drowned and was later resuscitated kayaking on a river in Chile.

What‘s interesting, is just like Eben (who suffered from an extremely rare form of meningities), it seemed like God used Mary’s injuries to get her attention.

As she was kayaking, she was trapped in the boat underneath a deluge of water. As people tried to rescue her, both her legs broke as she was sucked by the water out of the kayak. On top of that, she obviously inhaled a lot of water and after her resusitation, developed a lung injury (likely pulmonary edema) related to drowning.

What amazes me is that she and her doctor husband chose to take public flights back to the US without medical attention (they were initially treated at a clinic) which probably should have resulted in her death considering how sick she was.

A couple of things facinated me about her account.

One: Her views of God and our life. She gives an account of a conversation with an angel in a field where we know our life plan before we come to earth. God essentially lays out the blueprint for our approval and there are several branches of where we can make good and bad choices. This fascinates me on many levels– such as– did I really choose or “give the okay” for this kind of trauma in my life. Because if so– man!– I was really crazy to think that was a good idea. Unless we remember that suffering and crisis for many people brings them closer to God.

Two: The events surrounding her son Willie’s short life are nothing short of astonishing. During this conversation with an angel she learned that she needed to go back to help her family cope with the forthcoming death of her son before his 17th birthday. I believe the night before his 17th birthday, a man had pulled a gun on her son after a minor car accident. This incident he survived. But a short time later, as he was on a hike with a friend, he literally looked out over the landscape and said something close to– “Wouldn’t this view be the best thing to see before you die?” And within minutes he was run over by a car and killed. The whole account of Willie’s life is seriously skin chilling and inspiring.

Three: How God uses nature as a witness to His presence. Really, you just have to read her story to believe some of the things that happened here. Barren trees blooming after loved ones had died.

What was amazing in reading these books about NDE’s is the other things that occurred to these people after their experiences– nothing less than what I would call miracles.