Today, I’m concluding a three-part series on the non-fiction book, Proof of Heaven, written by Dr. Eben Alexander as he discusses his Near Death Experience (NDE) after he contracted a rare, often deadly form of E-coli meningitis. Here are Part I and Part II. 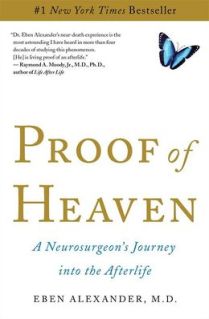 Toward the end of the book, Dr. Alexander lists the current medical theories offered as explanations for NDE’s and why he now completely discounts them and now has a firm belief that there is a loving God and Heaven.

1. Primitive brainstem program to ease terminal pain. Discounted due to the vibrant nature of his experience.

2. A distorted recall of memories from the limbic system. Again discounted for the same reason as above.

3. Endogenous glutamate blockade with excitotoxicity– mimicking the hallucinatory anesthetic, ketamine. I mean, really, this is how smart and scientific he viewed this process. As he explains in his book, he’d seen people under the effects of ketamine and the hallucinations are nonsensical whereas his were not. I would agree with that regarding ketamine as we use it for conscious sedation in the ED.

4. DMT dump which is a naturally occurring serotonin that causes vivid hallucinations. Dr. Alexander confesses to experiencing some hallucinations with drug use in his teens and argues against this theory because you’d have to have a relatively intact, functioning brain for which he did not while in his coma.

5. Functioning areas of cortical regions but he discounts this considering the severity of his meningitis.

There are four more that he lists in the book. What Dr. Alexander did do that I found interesting was write down his experience with as much detail as he could before he read about other NDE experiences so as not to taint his own perception or tarnish his data. Then he thoroughly researched what others had scientifically proposed and steps through why they are not relevant.

Overall, I found this to be a very fascinating book. It does at some points read like a textbook but I think we in the medical community need to pay attention to the spiritual aspects of our patients as part of their illness/injury process and I think learning from people who have had these experiences can help us to that.