JoAnn Spears continues her series on Queen Anne’s very interesting obstetrical history. You can find Part I and Part II by following the links.
Part Three:  How could this happen?

One or more of the following conditions may have played a part in Anne’s hauntingly tragic obstetrical history.

Rhesus incompatibility occurs when an Rh positive baby is carried by an Rh negative mother.  The pattern with this condition, untreated, is one of normal initial pregnancy or pregnancies, followed by miscarriages and stillbirths in a progressive pattern. A normal later pregnancy, while statistically less likely than a problem one, could occur if an Rh negative child were conceived; perhaps young William of Gloucester was such a child. 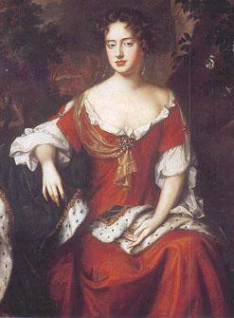 Chronic Listeria infection is also congruent with Anne’s reproductive clinical picture. Listeria is associated with improperly handled cheeses and meats, and food safety in Anne’s day and age was sadly lacking. She ate, however, what everyone else at her court ate, in quality if not quantity. A coinciding rash of female infertility in the women of Anne’s court is not reported.

Cephaolpelvic disproportion occurs when a mother’s birth canal is too small to accommodate delivery of the largest part of the fetus, its head. Some believe that Anne’s anatomy may have had something to do with her troubles. A later Stuart descendant, the wildly popular Princess Charlotte, fell victim to this condition. She died after three days in unsuccessful labor with her first pregnancy.
Medical records from Queen Anne’s physicians are maddeningly vague. It is unclear if young William of Gloucester developed hydrocephalus shortly after his birth, or if he was born with an abnormally large head, or macrocephaly, to begin with. A spontaneous, unidentified congenital or genetic syndrome may have caused this symptom, and affected other of Anne’s babies. Interestingly, the hemophilia that the later Queen Victoria would introduce into Europe’s royal houses was probably caused by a spontaneous genetic aberration in Victoria.
Anne’s obstetrical history and her physical attributes, specifically her obesity and red, round face, are congruent with Cushing’s Syndrome, a hormonal imbalance. However, Cushing’s is associated with menstrual irregularities. One of the few clear, objective medical statements we have about Anne comes from a physician who commented that, even when she was in her 40s, her menstrual cycle was as regular as that of a twenty year old.
Systemic Lupus Erythematous, or SLE, was discussed in Part Two of this series. It can lead to issues with fetal health, but statistically not to the extent that this occurred with Anne. Flare ups of poor maternal health would be more expected.
Porphyria was the cause of the madness of the post-Anne monarch, King George. Certainly, the catch-all term ‘gout’ would have been used by Anne’s medical men for the painful symptoms of porphyria’s metabolic derangement. However, Anne’s symptoms seem to have been more of a chronic nature than those of poor King George, and she was not emotionally labile.
**********************************************************************

JoAnn Spears is a registered nurse with Master’s Degrees in Nursing and Public Administration. Her first novel, Six of One, JoAnn brings a nurse’s gallows sense of humor to an unlikely place: the story of the six wives of Henry VIII. Six of One was begun in JoAnn’s native New Jersey. It was wrapped up in the Smoky Mountains of Northeast Tennessee, where she is pursuing a second career as a writer. She has, however, obtained a Tennessee nursing license because a) you never stop being a nurse and b) her son Bill says “don’t quit your day job”.