I got a message from a new blog reader with this comment:

Finding this blog is so timely for me, as my protagonist witnesses a strangulation in the first scene of my WIP, and I haven’t been able to find out the precise observable symptoms.  I wanted to ask if you’d done a posting on strangulation.  I’ve looked back a bit in the blog archives, but haven’t seen that topic yet.

I’m sure many of you, particularly if you’re an avid crime show TV watcher, have seen the scene with the medical examiner and the victim splayed open on the table talking about damage to the “hyoid” bone. Though this is true, damage to this bone or the trachea itself is not what ultimately kills a victim who is strangled to death, though it can complicate their care if they live.

For instance, there have been instances of individuals with tracheotomies hanging themselves and the ligatures were above the level of the trach– which means the person would still be able to breathe.

So the following theories are proposed as explanations for the cause of death related to strangling.

Venous obstruction, leading to cerebral stagnation, hypoxia, and unconsciousness, which, in turn, produces loss of muscle tone and final arterial and airway obstruction.

Vagal collapse, caused by pressure to the carotid sinuses and increased parasympathetic tone.

Which is a lot of scientific language to say “death ultimately occurs from cerebral hypoxia and ischemic neuronal death“. 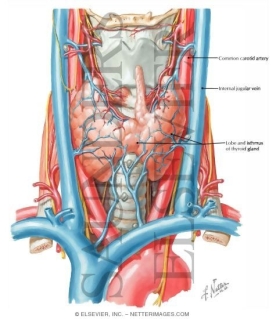 Which means– when a person is strangled, they die because their brain is no longer getting blood flow from the carotid arteries, which leads to brain cells dying from lack of oxygen.
As you can see from this photo, the major blood vessels that drain blood from the brain but also, more importantly, feed it with oxygen– are in very close proximety to the trachea or windpipe.

It is the vital oxygen these vessels carry to the brain that upon slowing or stopping– is the biggest problem for the victim.

How to Improve Your Investigation and Prosecution of Strangulation Cases. http://www.ncdsv.org/images/strangulation_article.pdf: