Charise’s question is very pertinent particularly with so many wildfires burning in my home state of Colorado right now. How does EMS handle it all?
Charise asks: 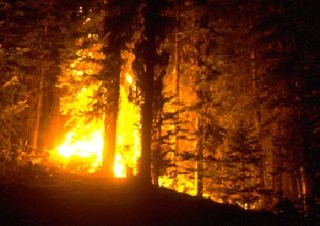 I’ve got a forest fire happening and a news photographer out trying to get the best shots. She’s walking around recently scorched areas. Her car is parked on black top.  It’s still pretty hot and smoky but she is there without an air tank so it can’t be too crazy.

I need her car to be inoperable but nothing too crazy like exploding. Is it possible that parked on asphalt, the tires would blister or begin to melt (but a person could still be okay walking around on the dirt)? It seems the way heat is conducted in the earth vs. pavement makes this plausible?

Also, I know animals flee a fire but do they get caught sometimes? Is it possible she’d come across a dead deer?

After she leaves the area, it’s normal she’d have some smoke inhalation problems? Coughing, hacking, etc? Does that require medical treatment or would she be left alone since she’s lucid and otherwise healthy?

My first thought is that rescue personnel (fire, EMS, law enforcement, haz-mat, etc.) form a perimeter (boundary circle) of three areas: the hot zone, the warm zone and the cold zone.
Hot zone is where the actual emergency event is occurring (in your story case, the forest fire). Warm zone is the surrounding area next to the hot zone; it’s for rescue personnel to enter and exit the hot zone and for decontamination. Cold zone is the area beyond the warm zone and is the only area okay for civilians, including the media.
That said, your character wouldn’t be allowed in an area that her car would experience the damage you stated. Now, of course, sometimes the media and other civilians enter a restricted area like the warm zone (they wouldn’t enter the hot zone unless they’re willing to die). So, you could certainly add that into your story, but she would have charges brought on her, so your story needs to reflect that.
It sounds like you have your reporter character staying with rescue crews, and that’s not accurate. We “deal with” the media this way — we tell them exactly where they can stand and set up their equipment, we keep them informed and updated, and we monitor their whereabouts, but we don’t hang around with them since our job is to work the scene (not watch it unfold), and we certainly don’t allow them to travel around with us at a scene. Sure, we talk with the media, even joke around and share information as appropriate (sometimes just to emotionally handle intense situations), but it’s kept to a minimum and very professional. Good conflict for fiction, though, would be for a rescue personnel to deviate from this, but make sure that person has strong reason for doing so.
It’s highly unlikely she wouldn’t be caught (the boundaries are well monitored), especially since you say she suffers with respiratory issues, so the authorities would know she entered the warm zone (we’d hear her coughing).
As for the medical issues she’d experience, it depends on where exactly she traveled at the scene and it depends on her signs and symptoms. She wouldn’t be covered in ash unless she was actually in the hot zone. If she does experience any respiratory distress, she’d be unwise not to seek medical treatment, and the treatment we’d provide is oxygen therapy, IV, possibly meds and a CPAP depending on her signs and symptoms, and we’d definitely hook her up to our cardiac monitor and evaluate her vitals. This is my thinking: If she’s “covered in ash” then her respiratory system was definitely compromised and she needs medical treatment from EMS.
So, make medical information fit into your story (not the other way around) by simply keeping things within the possible and changing little things in the story as needed. For example: If a character suffers a head injury and you don’t want that character to go to the hospital on scene, then simply have the character well cognizant with minor signs and symptoms, and later on that character could develop serious signs and symptoms if that’s what you want. Another thing: all patients are different, so how one patient’s body responds medically isn’t the same as another patient’s body; meaning, there are a ton of ways to write medical aspects in fiction.
As for animals: Sure, all types of animals are caught in all kinds of disasters, so anything there is possible.

After majoring in communications and enjoying a successful career as a travel agent, Dianna Torscher Benson left the travel industry to write novels and earn her EMS degree. An EMT and Haz-Mat Operative in Wake County, NC, Dianna loves the adrenaline rush of responding to medical emergencies and helping people in need, often in their darkest time in life. Her suspense novels about characters who are ordinary people thrown into tremendous circumstances, provide readers with a similar kind of rush. Married to her best friend, Leo, she met her husband when they walked down the aisle as a bridesmaid and groomsmen at a wedding when she was eleven and he was thirteen. They live in North Carolina with their three children. Visit her website at http://www.diannatbenson.com