Recently, I did an overview of diabetes. Here are the links to Part I and Part II. As authors, I think it’s good to have a general understanding of the major illnesses so you have a background of whether or not you’d like to afflict your character with it.

Asthma AKA reactive airway disease. Generally, when we think about respiratory disorders, we divide them between the upper and lower part of the respiratory system. The division between the two is generally your larynx or voice box. Upper airway disorders are things such as croup, foreign body, and epiglotitis. Disorders of the lower airway are asthma, bronchiolitis and pneumonia. 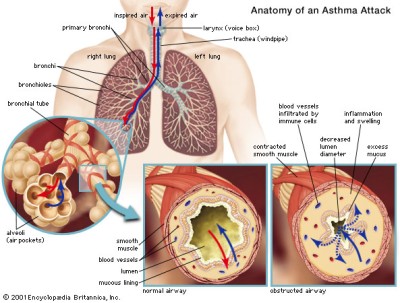 There are several things happening in the lowers airways during an asthma attack. There is constriction of the airway as well as inflammation and increased mucous production. It’s easier for air to get in than to get out.

Symptoms of asthma can include some or all of the following: Difficulty breathing, wheezing, coughing, low oxygen levels, air hunger, tripod positioning, and pale or blue lips.

In pediatrics, there is reluctance to diagnose asthma under the age of three years. So, even if a child presents with multiple episodes of wheezing, they are likely to be diagnosed as having “reactive airway disease” until they are older and their clinical picture becomes more clear.

The other thing to keep in mind is that all wheezing is not asthma. An upper airway issue can lead to wheezing in the chest. These sounds are deferred. Think a balloon that is stretched to the point where it squeaks as air passes through the tight opening. This can happen in the lungs as well if the larger upper airways are having a problem.

Sometimes, an infection in the lungs (either viral or bacterial) can also lead to wheezing and we will target this wheezing with asthma like therapies. It doesn’t mean the person will end up with asthma. It is possible it was just a symptom related to their illness.

However, if the patient develops a picture of wheezing consistently with every viral illness– then an asthma diagnosis becomes more probable as viral illnesses can be a trigger for the disease.

Do you have a character that suffers from asthma in your ms?