Sheila asks: In my WIP, I have the good guy (a doctor) trying to get the pregnant heroine away from a dangerous situation. She resists so I thought he might give her an injection to knock her out. Is any drug available to put a pregnant woman into a deep sleep that is not harmful to the fetus?
Jordyn says: First thing to know is that every drug has a pregnancy classification given by the FDA based on its potential harm to a growing baby. You can find an example of this at this web site:

Based on this, you can look up certain drugs and get a hint about their potential harm to the baby.
I looked up several drugs that could be injected to knock a woman out.
Benzodiazepines are all injectable… this would be Valium, Versed and Ativan. Given rapidly IV, they could knock the woman out but also depress her ability to breath. This could harm the baby. They are all category D on the scale which denotes that there is evidence of potential harm. However, how far along is the woman in her pregnancy? Is she near term? Drugs will have different effects given the term of pregnancy and also how long the drug is used for. For instance, a single injection of Valium given late in pregnancy probably will have little effect on the baby as far as causing a birth defect. Also, this doesn’t mean you can’t pick this drug. It would increase the internal conflict of your character, knowing he is giving a potentially harmful drug to this woman.
Benadryl, which is an antihistamine, can also be given IV. It may make the character sleepy but not totally knock her out. Benadryl’s effects aren’t at all predictable. It’s drug category is B.
Then, I thought of Ketamine. We use this in the ER all the time to sedate patients for reductions of fracture and other painful procedures. It has a very predictable effect and can be given IV or into the muscle (IM– intramuscularly). The IV duration is typically shorter than the IM duration.
Here’s some info regarding Ketamine’s use during pregnancy:
Ketamine Pregnancy Warnings
“Ketamine has not been formally assigned to a pregnancy category by the FDA. Animal studies at higher than human doses failed to reveal evidence of teratogenicity or impairment of fertility. There are no controlled data in human pregnancy. Since the safe use in pregnancy and delivery has not been established, the manufacturer recommends that ketamine be considered contraindicated in pregnant women. Ketamine has been assigned to pregnancy Risk Factor B by Briggs et al. as probably compatible.” http://www.drugs.com/pregnancy/ketamine.html.

Heidi offers this perspective:  It would be highly unusual for a doctor to get involved with a patient’s decision to return to an abusive relationship (or prevent it). The intervening party is usually the nurse. In the case you are describing, if the nurse was trying to keep a pregnant patient out of harm’s way, she/he could do many things but the standard is to get a good reactive strip, then give 2mg Stadol and 25 of Phenergan, this combo will generate a nonreactive strip (put both mom and baby to sleep), the doc cannot release the patient with a non-reassuring strip.

Benadryl can also be used to put a pregnant person to sleep, Tylenol pm is highly used but it does not usually affect the strip. But for all intensive purposes, the drug of choice to stop a pregnant person from going anywhere would be phenergan because it is easily accessed, you do not need a witness to remove from the automated drug delivery system, and it is prescribed regularly for nausea and vomiting which are common in pregnancy. Also, pregnant patients are familiar with it and don’t usually question it if the doctor orders it.
Any other thoughts for Sheila? 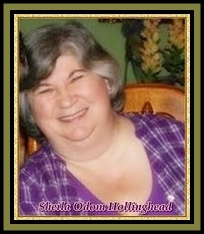 A retired middle-grade science teacher and proud grandmother to three, Sheila Hollinghead lives in south Alabama with her husband of thirty years. She has written three books and is seeking publication. She also writes two blogs, one for Christian writers called Rise, Write, Shine!: http://sheilahollinghead.blogspot.com/ and a devotional blog, Eternal Springs:  http://sheilaodomhollinghead.wordpress.com/.