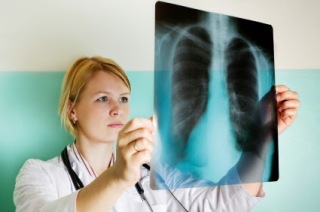 What would a lung contusion involve? Specifically, how would it be diagnosed (you said it could take up to six hours to show on x-ray), how would it be treated, etc? I Googled it, but still wasn’t sure how it would work in my story. Since she has broken ribs, I’m assuming the treatment would have to be altered a bit (I read something about using a spirometer and coughing …) She’s in a small-town med center rather than a big-city fully-equipped hospital.

A lung contusion is a bruise. It really depends on how much of the lung is involved as to how sick the patient will be. From this link you can see how different a chest x-ray can change after a few hours with this injury. Whenever anything is injured, an inflammatory response happens which explains why there is a delay seeing it on chest film. Chest x-rays, in certain disease conditions, can lag behind patient exam so they are just one piece of the puzzle.

The problem becomes that whenever there is fluid from an inflammatory response, those areas of the lung can’t participate in oxygen exchange because the lining between the cells where gas exchange occurs is big, puffy and full of water. The more involved the lung is the sicker the patient will be. We can try to drive out the fluid by using ventilators, or positive-pressure ventilation, to force the water from the lungs. In absence of pending respiratory failure, the patient needs good pain control, chest physiotherapy and supplemental oxygen if saturation levels are below 90%.

I think the above link gives a nice overview of the injury complications and treatment.

I don’t see that trying spirometry would hurt– it’s just going to be painful but they can assist with her doing this exercise by giving her a narcotic pain reliever.

Stacy Aannestad lives deep in the heart of the great state of Texas with a husband named Bjorn, just across town from where their son is studying linguistics at the University of Texas. She is currently writing the first of a series of novels involving a guy from New Zealand, a girl from Texas and a Christian rock band comprised of guys with accents from several parts of the English-speaking world. (Clearly her family has a love of languages!)