I’m happy to host author Christine Lewry as she shares her first hand account of a breast cancer diagnosis. Christine– thank you so much for sharing such a vulnerable part of your life with us today. I am humbled by your honesty and bravery and am glad you have been cancer free for over 10 years. 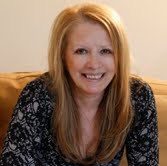 I felt the lump again. ‘It’s probably nothing,’ I said out loud. It wasn’t a hard lump but a knot of soft tissue under my arm. A wave of overwhelming doom made my knees buckle, I sat back on the bed.
I rang the doctors’ surgery. ‘Is it an emergency?’ the receptionist asked.
I thought for a moment. Is it?
‘Well … yes,’ I replied. She gave me an appointment for later that day. I wandered about the house, kept looking at the clock, didn’t get anything done.
‘I don’t think it’s anything to worry about,’ the doctor smiled. ‘But I’ll send you for a mammogram.’
My husband, Tony, came with me for the mammogram. We sat in a comfortable pink waiting room and read the newspapers. He made a cappuccino from the machine. The nurse’s hands were round and warm as she squeezed my breasts into the X-ray machine. ‘I’ll show these to Dr Wainwright,’ she said. I got dressed and returned to my newspaper – I didn’t want to look at the frightened faces of the other patients.
‘Doctor wants to do an ultrasound,’ the nurse with the warm hands said.
I lay on a narrow bed while Dr Wainwright squeezed cool gel on my chest and ran the ultrasound probe over it. The room was dark apart from the faint glow from her computer. Shadows fell on the walls like ghosts in the night.
‘There,’ she pointed to a haze of white on the screen. ‘I’ll do a biopsy, then we’ll organise a taxi to take it to the lab.’
Tony stayed home with me until the hospital rang. ‘Very sorry, but you have breast cancer.’ The words sounded so trivial and yet so profound and life changing. I tried to stay positive. Anyway, what could I do? Break down? Scream? I had to hold on tight to the belief that I was going to be alright.
The morning of my operation, Dr Wainwright and the surgeon gathered around my bed. ‘We’re going to do a larger operation than we originally planned,’ Dr Wainwright said. ‘We’ve decided to take the lymph nodes from under your arm, in addition to the lumpectomy. The lymph nodes are used to diagnose whether the cancer has spread outside the lump.’
I signed the form, leaving it to them to do whatever they thought might save me.
The next day my surgeon came to see me. He smoothed out the starched sheet and sat on my bed. ‘I’ve got the results of the lymph node biopsy. I’m afraid it’s bad news,’ he said. ‘Of the twelve lymph nodes I removed, six have cancer. I’ll arrange for you to see an oncologist. I expect he’ll recommend chemotherapy.’
I turned over and stared at the wall, waiting for Tony to arrive. My life was slipping away, like grains of sand falling through my fingers. The thought that I had cancer spreading through my body was terrifying. What if I died leaving my children without a mother? They were so young that there would come a time when they wouldn’t even remember me. I would be that photograph smiling back from the mantelpiece, a sad remnant of a woman who died long ago, never moved or put away since she left.
The oncologist talked in percentages and statistics, about improvements in life expectancy of five or ten years, his voice set in a monotone devoid of hope or compassion. What bloody good was five or ten years? I wanted to live, not wait it out. I wasn’t going to take on his fear or negativity.
The chemotherapy made me feel sick. I tasted its bitterness in the delicate lining of my nose and at the back of my throat. It made me feel like every cell in my body had been poisoned and that I had the most dreadful hangover, yet I hadn’t even had a glass of wine.
Mentally I had to pace myself. Six times, once every three weeks. I could manage that. I counted them off. Still, it was hard for me when all the hair on the top of my head fell out despite the torture of the cold caps. I always did care too much about my appearance.
‘Do you love me?’ I asked Tony whilst having the pinky-red chemotherapy dripped into my veins. The anti-sickness medication made me constipated for days and I became frail and weak. The more ill I became, the more I thought that if I died he might find a new wife; someone younger, thinner, better than me.
When my treatment finished, I was cast adrift. All the time I had been having hospital appointments, chemotherapy or radiotherapy I had been doing something positive to fight the disease. Now I floated about, waiting to see whether I would sink or swim.
***********************************************************************

Christine Lewry lives in Hampshire, UK with her husband and two youngest children. She worked in the defence industry as a finance director for twenty years before leaving to write full-time. Thin Wire is her first book. For more info: http://www.christinelewry.com/