Jessica Asks:
I’m writing a war scene where a character is hit by a piece of shrapnel in the abdominal aorta; the other things I wanted to know were: 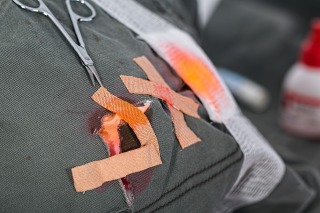 1. How long would he remain functional (as in able to walk, run, shoot etc) with that kind of blood loss?
2. This character wears a device called a ‘Scorpion’ which is an injector that dumps stimulant drugs into his bloodstream. Would this cause him to bleed out faster?
Jordyn Says:
The abdominal aorta is a large blood vessel in your abdomen. The answer to your questions depends on how badly the abdominal aorta is injured. If it was simply nicked—that would give your character some more time and if his limbs were uninjured he could probably run, walk, and shoot if the injury to his belly wasn’t grievous. Theoretically, if it was just a little leaky he could do all right but I’d make it clear to the reader that the medical team found that the abdominal aorta wasn’t really injured.
If his abdominal aorta is completely severed– he’s dead in under one- two minutes. That’s a fatal wound. The odds would be against him even if he were inside a hospital when this happened. He might be able to hold a weapon and fire for a few seconds but I don’t see him being able to stand, etc.
As far as would the use of a stimulant cause him to bleed out faster— yes, if nothing is stopping the flow of blood like a dressing. A stimulant increases your heart rate so it’s like turning a hose up with a higher flow– if nothing is capping off the end of the hose the fluid loss would be greater.
Hope this answers your questions and happy writing!