I came across your blog as I was googling my question. This week, I was watching Grey’s Anatomy (Season 14, episode 18) in which an unscrupulous (or maybe it he was just a fraud?) doctor was giving false diagnoses for breast cancer through ultrasound—I think to sell treatment?

Knowing a little about computers, I wondered how that could be possible. Can an ultrasound store the millions of images or 3d imaging from another patient to be “played” on another patient? Of course, I wrecked the show for my wife by questioning the episode she was enjoying.

So, in case I’m all wet in my assumptions, is it possible to fake an ultrasound in real time?

Hi Gerard! Thanks for submitting your question to me. The perfect person to answer your question is Redwood’s resident medical expert, Shannon Moore Redmon.

Today’s ultrasound technology does offer the ability to record video clips that an extremely unethical doctor could replay while pretending to scan a patient with a probe. Most patients would not know the difference between normal breast tissue compared to a malignant mass and the shape of the entire breast isn’t really a factor on the ultrasound screen, since we’re only scanning a small section at a time.

With that said, the hoax displayed in the Grey’s Anatomy episode – Hold Back The River, would be difficult to achieve in real medical life.

First, ultrasound is not the Gold Standard for detecting breast cancer. That role belongs to mammography (x-rays of the breast). Highly trained technologists position and complete several different mammography views. Ultrasound simply supports suspicious lesions first detected on these images. Doctors use the scan to provide more information and ultrasound should never be used alone to detect malignancy. I hope most patients would not simply take a doctor’s word based on an ultrasound alone when determining whether they have breast cancer or not.

When a mass is identified on a mammogram and followed up with ultrasound, these images or video clips do not give a complete diagnosis of cancer. We can suspect cancer by the appearance of the mass we see, but the only way to know for sure if the mass is malignant, is through a biopsy. Stereotactic breast biopsies are often performed at imaging centers or hospitals. A large needle is used to take samples of the mass and then send them off for pathology testing. Those results tell if a mass is cancerous or not. If the patient is not a candidate for stereotactic breast biopsy, then the mass can be removed in surgery and sent to pathology for testing.

When a sonographer finds a suspicious mass on ultrasound, we look for several factors in the appearance. Is it solid or fluid filled? Does is have smooth borders or finger-like spiculations extending into normal tissue? Does a shadow present posterior to the mass? The mass shown during the episode did not meet the specified criteria for malignancy. Let’s break the moment down:

The doctor shows the female character a mass on the screen. There was no shadowing posterior. The borders were smooth and looked like the normal tissue adjacent to it. The area the physician suggested was solid but had a Cooper’s ligament running through the tissue which is typical for a normal lobe of the breast. I’ve included an ultrasound image of a true malignant mass, so you can see for yourself what a true breast cancer might look like on ultrasound. I think you’ll find the video clip played in the scene looked nothing like the true cancer below. 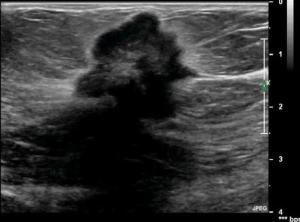 During the scene, a swishing heartbeat noise can be heard in the room. Grey’s Anatomy seems to think that when an ultrasound is being used, every machine creates this noise. Let me assure you, that’s unrealistic.

The noise heard in the background is created by a Doppler sample of a vascular structure, such as an unborn baby’s heartbeat or blood flowing through an artery. Neither of these were being scanned during our breast exam.

When no Doppler is activated on the screen, this sound cannot be heard. But yet, we have the heartbeat noise once again. I wish someone at Grey’s Anatomy would update their sound effects team.

After the blond female doctor goes back to Seattle Grace, she has her doctor friend scan her breast to make sure there is no cancer. The doctor who performs the scan and supposed to be knowledgeable enough to detect breast cancer, is holding the wrong probe. She should be holding a linear transducer used in high frequency imaging and provides a rectangular footprint on the screen. Instead, her probe is curved and used for abdominal and pelvic scanning because of the lower frequency range.

Another flaw in the episode is how all these doctors are experts at performing scans in every area of the body. In real life, trained, registered sonographers and technologist work in these modalities. They would be the ones to execute the imaging. Then a radiologist would read the exam and communicate with the surgeon or other physicians. But once again on TV, we see the Grey’s Anatomy doctors performing all the imaging exams. No sonographers or technologists around anywhere. So unrealistic and a little insulting.

I think it is time for the Grey’s Anatomy team to hold back more than the river— they need to hold back on performing any more ultrasounds until they consult a living breathing registered Sonographer. 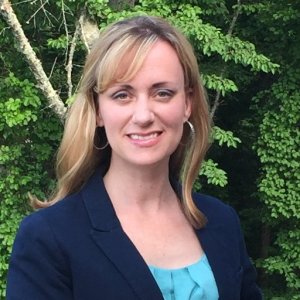 gospel truth of Jesus Christ. Her stories dive into the healthcare environment where Shannon holds over twenty years of experience as a Registered Diagnostic Medical Sonographer. Her extensive work experience includes Radiology, Obstetrics/Gynecology and Vascular Surgery.

As the former Education Manager for GE Healthcare, she developed her medical professional network across the country. Today, Shannon teaches ultrasound at Asheville-Buncombe Technical Community College and utilizes many resources to provide accurate healthcare research for authors requesting her services.

She is a member of the ACFW and Blue Ridge Mountain Writer’s Group. Shannon is represented by Tamela Hancock Murray of the Steve Laube Agency. She lives and drinks too much coffee in North Carolina with her husband, two boys and her white foo-foo dog, Sophie.