There are few things that make me nervous in the ER anymore. After spending twenty plus years in nursing, I’ve seen and handled most everything. 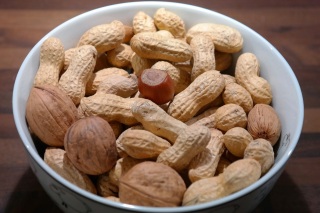 One exception is peanut allergies. When a patient signs in with that complaint it is emergent because of the concern of anaphylaxis which I posted about here. There is a point of no return when it comes to an allergic reaction where the patient will die despite all efforts.
The other question becomes just how do we protect these children? An Epi-pen should be kept with these children at all times. For one, some parents won’t do this. Also, parents are uncomfortable giving these injections.
Another reaction is to create a peanut-free environment. In reality, I don’t know how feasible this is. Peanuts and peanut products are prolific and I feel like this gives parents a false sense of security.
Recently, researchers developed a study to see if they could inhibit the body’s response in a peanut allergy. They gave small but increasing amounts of peanut protein along with a probiotic every day for eighteen months. The test group was split in half with half of the participants receiving a placebo that looked and smelled like the treatment. On the last day of the study, the participants were given a double dose of peanut protein with the probiotic. Twenty-six of the twenty-nine children didn’t have an allergic reaction whereas only two of twenty-eight in the placebo group demonstrated the same.
Of this group on non-reactors, after a two-five week period of being peanut free, they were retested and twenty-three of twenty-five still had no reaction.
Over time, it is possible for the body to build up tolerance but this method has been found to be twenty-times more effective.
The next step is to see how long this effect will last. Will it be a cure?
It might be too early to tell but it might well be a very good step in the right direction.
Would you try this for your child if they had a peanut allergy?