Just as I’m writing a series about medical news stories that could perk a writerly ear, and I’m choosing to highlight the woeful tale of the man who committed suicide in court after his verdict was read, comes the case of the lottery winner who died of “natural causes” the day after he collected his winnings– close to a half-million dollars.

About one month after his death, his lump sum lottery check was cashed. 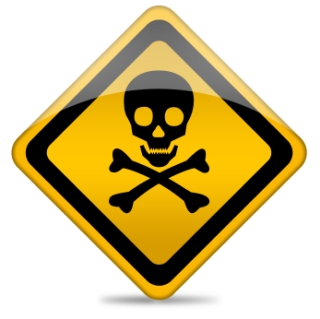 According to this ABC news video, a suspicious family member asked the medical examiner’s office to take a closer look so they ran a toxicology test on his blood and lo and behold– cyanide.

What was interesting to me is that the medical examiner stated that cyanide’s use as an instrument of murder is effective but actually fairly rare. It wasn’t in this particular interview but in another one where he stated he had seen another case but it was almost 20 years ago (don’t quote me– but it was a long time.)

So in light of cyanide being on the news so much lately, I thought I’d specifically talk about the treatment for cyanide poisoning and how it works.

Remember, last post, the cyanide molecule works quickly (depending on the ingested dose) to block the cell’s ability to use oxygen. So you basically asphyxiate on a cellular level.

Signs/Symptoms of cyanide poisoning may be:

These medications work differently to bind up the cyanide molecule which will then allow the cell to resume cellular respiration. For instance, the sodium thiosulfate converts cyanide to thiocyanate which is then cleared by the kidneys. The pearls are crushed then inhaled as treatment until IV access can be established.

What’s interesting to note as well is that one article states– do not wait for laboratory confirmation to
institute treatment. Just shows how rapidly a patient can die.

You can read more about treatment here.

Cyanide can be inhaled (hydrogen cyanide) and absorbed through the skin. In fact, cyanide gas is used in gas chambers.

Chronic consumption of cyanide-containing foods (cassava root, apricot seeds) can lead to cyanide poisoning.  Some symptoms of this would be ataxia (inability to walk– like an intoxicated person will walk) and optic neuropathy (visual changes, etc).

Smoke inhalation, suicidal ingestion, and industrial exposure are the most common instances of toxicity.

A person involved in a fire with soot in the mouth/nose, decreased level of consciousness, and low blood pressure may have cyanide poisoning.

Suicide by cyanide is more common among males.

Persons who survive cyanide toxicity may continue to have medical problems that involve the central nervous system.